Note:  The Jets were off on Sunday after finishing a road trip that saw them play seven of their last eight games away from Bell MTS Place and capping a month of November which saw them go 10-3-1.  They play 13 games in the month of December and six of those games will be home and home series which starts tomorrow when they welcome their division rival Dallas Stars to town.  Today they will practice at 11:00 AM as they get ready for Dallas.  Be sure to check back for the Practice Report.

Note II:  The Moose were also off on Sunday as they continue their longest road trip of the season which will wrap up on Tuesday in Rockford.  Today they will practice in Illinois at 1:00 PM as they look to keep their November momentum going.

Winnipeg Sun:  November to remember for Jets.  Scott looks back at the month that propelled the Jets into a playoff spot. 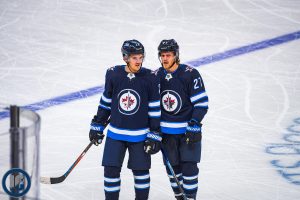 Winnipeg Free Press:  ‘It’s going to be scratch and claw’.  (Paywall).  While the Jets have put them in the mix they certainly cannot afford to coast until April.

The Athletic Winnipeg:  Paul Maurice: ‘We’re probably not going to be an analytics darling this year’.  (Paywall).  That statement checks out.

Topics: Jets/Kings Preview, The NHL standings at U.S. Thanksgiving and which teams can still make a run, Bill Peters resigns/fired as the Calgary Flames Head Coach after being accused of racism and physical abuse, Manitoba Moose Week in Review.