Note:  Today is the first day of the NHL season and while the Jets don’t play until tomorrow night the local pro hockey club has been making a lot of news!  Like a lot of it.  Today they will have a media availability at 11 AM before they depart for NYC as they prepare for their season opener against the Rangers on Thursday which will kick off a four-game road trip.  Tune in for the Practice Report for the latest news and audio.

Note II:  That was as wild a Monday as I can remember.  It began with the news that the Jets lost Eric Comrie to an Arizona waiver claim, picked up the Hawks left-shot defenceman Carl Dahlstrom, had JC Lipon/Nelson Nogier clear waivers and then later advise that Bryan Little and Nathan Beaulieu are injured, follow this up with news that Sami Niku had been assigned to ultimately get to a 23 man roster.

Note III:  Jets coach Paul Maurice indicated the team had asked Josh Morrissey and he accepted their offer for him to be designated as an alternate captain for the upcoming season.

The Athletic Winnipeg:  Adam Lowry on the Jets’ systemic changes, shiny cars and the little plays he never forgets.  (Paywall).  Murat had this Q & A with the Jets 2011 3rd rounder.

Winnipeg Sun:  After Chevy’s busy summer, it’s time for Maurice to make things happen for Jets.  All eyes are gonna be on this coaching staff to see what they are able to get out of this lineup this season.

Winnipeg Sun:  Jets’ Little, Beaulieu out of lineup, Comrie picked up by Arizona.  Plenty to digest from Scott’s notebook as he compiles all the happenings of Monday into this article.

Winnipeg Free Press:  Jets roster takes shape, sort of.  (Paywall).  Still plenty of questions marks regarding this squad but for better or worse you have to deal with the hand you are dealt. 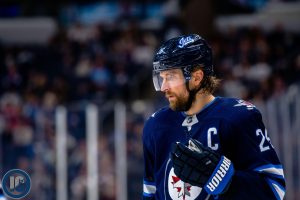 Winnipeg Free Press:  Teen defenceman Heinola finds a home on blue line.  (Paywall).  He sure seems to be bucking the trend.  It will be interesting to see if he lasts past the nine game mark (i.e if Jets will burn a year of his entry-level contract).

The Athletic Chicago:  What’s it like to be claimed off waivers while in another country? Carl Dahlstrom now knows.  (Paywall).  I always find it interesting to hear about the process aspect of these type of situations.

The Athletic Winnipeg:  Finland summit has obvious benefits for Patrik Laine and the Jets.  (Paywall).  The meeting of the minds was clearly important for both sides.

CBC:  Jets try to put early adversity behind them as season opener looms.  I suspect the Jets will be using adversity/chip on their shoulders as the mantra for this season.  And I don’t think that is a bad thing.

TSN:  Wheeler discusses the possibility of losing Byfuglien.  Blake Wheeler joins James Duthie to discuss the extra element that Patrik Laine and Kyle Connor bring to their team after signing new deals. He also talks about possibly losing Dustin Byfuglien for the upcoming season as everyone awaits word on whether he’ll play or not.

TSN:  How will Jets address their blueline concerns?  With Dustin Byfuglien still undecided about playing this year, That’s Hockey panel of Bob McKenzie and Craig Button discuss how the Jets plan to address their concerns on the blueline.

Sportsnet: Have off-season changes hurt or helped Flames, Oilers, Jets and Canucks? Caroline Cameron and Colby Armstrong discuss the rosters of the Calgary Flames, Edmonton Oilers, Winnipeg Jets and Vancouver Canucks with the 2019-20 season on the horizon.

Murat Ates of The Athletic joined Andrew Paterson and Rick Ralph on the Afternoon Ride. They discussed the Jets roster moves ahead of opening day, the uncertainty on defense, what Carl Dahlstrom brings to the team, where David Gustafsson and Ville Heinola fit in, and Andrew Copp’s spot centering the second line.

TSN Hockey Insider Pierre LeBrun joined Andrew Paterson and Rick Ralph on the Afternoon Ride. They discussed the Jets outlook for the 2019-20 season, the current situation with Dustin Byfuglien, Patrik Laine’s two year contract, Kyle Connor’s seven year deal and the Jets start to the season vs the Rangers, Devils and Islanders.

TSN.ca’s Travis Yost joined Andrew Paterson and Rick Ralph on the Afternoon Ride. They discussed the outlook for the Winnipeg Jets this season, the pressure facing head coach Paul Maurice and preseason rankings for the Central Division.

Winnipeg Jets Head Coach Paul Maurice joined Ray and Darren as their first ever guest on the podcast and talks about how their camp & preseason has gone with so many stories swirling around the team this summer. Paul talks about his life in the game and about just how much he loves coaching… and what he sings in the shower.

Illegal Curve:  An updated look at the Moose training camp roster.  With the moves made on Monday the Manitoba roster currently sits at 30.  They play in San Antonio on Friday to kick off their season.