An updated look at the Moose Moose training camp roster 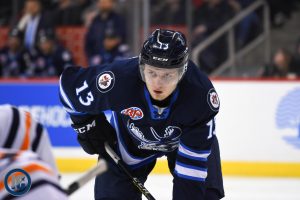 The Moose made some moves today announcing that Alexis D’Aoust has been assigned to Manitoba’s ECHL affiliate, the Jacksonville Icemen while Byron Spriggs and James Phelan have been released from their PTOs.

Originally it looked like the Moose were going to be bolstered by five players whom the Jets had assigned on Monday but in the end they gained four (Suess/Luoto – who didn’t need to clear waivers & Lipon/Nogier – who both cleared waivers) although they lost goalie Eric Comrie as he was claimed off waivers by the Coyotes.  This means that second year pro Mikhail Berdin will be the number one goalie with the AHL squad.  While I think Berdin is ready to handle that responsibility I don’t think it is ideal to have him as the next call up for the NHL team.  Which is why I thought it was a good idea to have them both in the fold so Comrie could go up if required.  If Comrie gets waived by Arizona perhaps he will be back the way we saw Marko Dano return to the organization after he was claimed last season by Colorado and then re-claimed by Winnipeg when placed on waivers by the Avalanche.

The Moose also got Sami Niku from the Jets although I suspect that is more about conditioning as he was dealing with a groin issue during Jets training camp.  Wouldn’t expect this to be for very long.

The Moose season gets underway on Friday when they take on the Rampage in San Antonio as they kick off the 2019-20 season.