Note:  Another Jets preseason game day is here as the Jets will practice in Winnipeg before they head to Calgary for a rematch with the Flames.  It will be a lineup filled with prospects as the team gets ready to trim their roster down (likely Wednesday).  The playing group won’t skate this morning but there will be a media availability at 11 AM so be sure to check back to the site for our pre-game report.  Puck drop is at 8 pm and will be followed with our usual post-game recap.

Note II:  There was a Jets heavy focus in the first TSN Insider Trading panel of the season as Bob McKenzie, Darren Dreger and Pierre LeBrun weighed in on Kyle Connor, Dustin Byfuglien and Patrik Laine respectively.

Note III:  The Moose are loose as they kicked off the on-ice portion of their training camp on Monday.  While there were some familiar faces including former team captain John Albert the majority of players are still with the Jets training camp.  That should change by Wednesday or Thursday when Jets cuts are expected and the Moose will get a big influx of players.

Winnipeg Sun:  Nogier has moved into Maurice’s depth house.  Nelson Nogier got a game with the Jets last year after a drought of NHL opportunity (prior to that game he last played in 2016-17) and given that he has continued his development and given the Jets lack of depth, it is the perfect storm for the Saskatchewan product to seize the chance when it presents itself this season.

Winnipeg Sun:  Berdin isn’t your typical goalie, and that’s A-OK.  As someone who covered his first season as a pro with the Moose I can attest to the fact that he is a character.  Having said that while most goalies are characters Mikhail may be at the top of that chart. 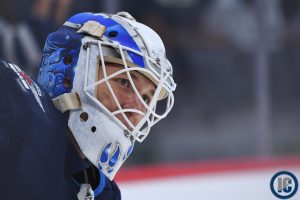 Winnipeg Free Press:  Bitetto looks comfortable, confident in pre-season outings thus far.  (Paywall).  So far the competition hasn’t been NHL calibre so it will be interesting to see what happens as the exhibition games start to ratchet up.

Winnipeg Free Press:  Young NHL stars’ done deals give Jets, Laine, Connor roadmap to resolution.  (Paywall).  When the Lightning got Point signed to his three-year deal on Monday many were hoping that it signaled the breaking of the dam for the remaining RFAs.

Sportsnet: Five reasons why the Winnipeg Jets are still Stanley Cup contenders.  Fans will be happy simply seeing the Jets and Stanley Cup in the same headline especially as some pundits question the Jets ability to even make the playoffs.

The Hockey News:  Suspending Byfuglien procedural for Jets, but it has potential benefits once season begins.  Plenty of uncertainty for this Jets team who many thought would be able to regain the form they showed two seasons prior.

The Athletic:  RFA pressure mounts after Point signing, Taylor Hall’s value and Winnipeg’s options with Byfuglien.  (Paywall).  Talks about the idea of mutual termination between the Jets and Byfuglien as an option but that doesn’t seem very likely.

The Athletic Winnipeg: Four players helping their cases and three players hurting them after 10 days of Winnipeg Jets camp. (Paywall).  No shockers on Murat’s list but an interesting read nonetheless as this article is about much more than just the headline.

The Athletic Winnipeg:  Rookie blueliner Ville Heinola makes his case for an unexpected extended stay in Winnipeg.  (Paywall).  Heinola is definitely noticeable when he hits the ice each and every single time he is out there.  Ken has more on the Jets top pick from 2019 as he dazzles during training camp.

Winnipeg Free Press:  Moose captain preps for new season.  (Paywall).  Stoykewych continues to mature both on and off the ice and has proven to be a good choice as the leader of this squad.

Winnipeg Free Press:  Former player returns to Moose.  (Paywall).  I was thinking about John Albert’s return and when I looked at the squad he last played with to now there are just three guys left on this Moose team including Stoykewych, Lipon and Comrie.

Williams Lake Tribune:  Outhouse inks one-year deal with AHL’s Manitoba Moose.  It has been quite the ride for the young netminder from a small town in BC.