Another day of Jets training camp

Today’s division of groups saw the AHL guys skate in Group 1 in the morning while the more NHL Group 2 skated at 12 noon. 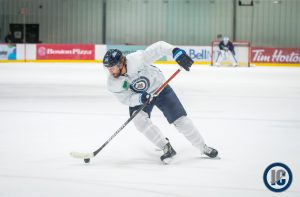 Sami Niku wasn’t listed and according to Mike McIntyre of the Winnipeg Free Press he was skating on his own between the groups as he deals with a minor groin issue.  Mike adds that Mathieu Perreault and Adam Lowry were missing from the group 2 skate.  Lastly these are the group 2 lines and D pairs according to Mike:

Coach Maurice:  Update on players missing.  What does he want to see in the next few days?  With three games left how does he plan on deploying his group?  Group 1 will likely be the makeup of tomorrow’s roster.  For the games on Thursday/Sunday would he like to have his opening night roster in those games?  Is tomorrow the last chance for guys to make an impression?  What is his goaltending plan?  What has he learned about Anthony Bitetto?  What would an 18 year old defenceman have to do to get you to stop looking at him as an 18 year old?  Is going to the Moose an option for Heinola?  What has he liked about Mikhail Berdin’s development?  Does he spend anytime trying to manage goalie “quirks”?  How has his relationship evolved with Wade Flaherty?  When he brings in new guys what are things he looks for signals as he gets to know them?  What are challenges for Mark Letestu for getting back to NHL?  Does he see chemistry between Letestu and Bourque?

Eric Comrie will start,  Mikhail Berdin could potentially get into the game according to head coach Paul Maurice who said he’d make the decision on the Bird Man during the game.

Jets playing group will practice on Tuesday before they head to Calgary to take on the Flames tomorrow night.