The insider trading segment is back and it had a heavy Jets focus today. 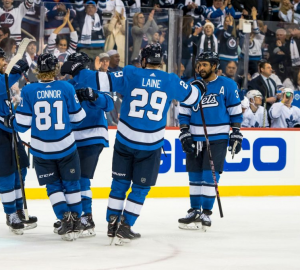 With hockey season back in full force the guys over at Insider Trading on TSN had plenty to say and today they had a heavy Jets focus as Bob McKenzie, Darren Dreger and Pierre LeBrun spoke about the trio of players that have all the focus here in Winnipeg:

– Said there is a perception that the Jets and Kyle Connor are closing in on a new contract but tossed cold water on that idea indicating Connor’s agent said it is not true, “they are not close either”.
– Connor would like to do a modern day ‘long term deal’ being five or six years but would probably be open to a four-year deal.
– Said the Sharks Timo Meier could be a model for Connor and what makes it comparable is that being a late birthday he wouldn’t hit free agency if he signs a four-year deal for a couple of years after.

– Sense that when/if a deal gets done it will be a bridge deal.
– Said teams have checked in this week with Laine’s camp but offered no clarity as to why (i.e. offer sheet or trade inquiry).

– Says Cheveldayoff continues to await Byfuglien’s decision.
– Termination of contract could be considered, very tricky and would require NHL involvement.
– Said Jets are talking to teams about potential trade but with this situation, hard to do anything.

You can watch the video here.