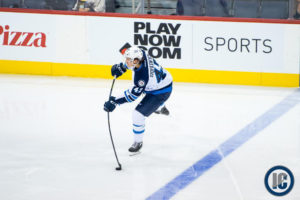 The Moose get loose today as they kick off the formal skate part of training camp.  There are quite a few Moose players still remaining at Jets training camp however the AHL squad will have a number of players who will be on the ice at the IcePlex including former Manitoba captain John Albert who was drafted by the Atlanta Thrashers in 2007 (6th round) and played for the IceCaps/Moose as well as nine games for the Jets.

The Moose also announced that they have signed goalie Griffen Outhouse to a one-year AHL deal.  Outhouse was a Jets invite to the Rookie Showcase in Belleville and clearly made a good impression on the organization.  From the team:

Outhouse, 21, spent the 2018-19 season with the Victoria Royals where he posted a 27-16-1 record with a 2.81 goals-against average and .913 save percentage in 46 games. The Likely, B.C. native played in 196 games for the Royals, posting a career 2.77 goals-against average and .917 save percentage, while compiling a 114-60-15 record. Outhouse ranks first among Royals franchise leaders in games played by a goaltender, and sits seventh in WHL history for most wins collected by a goaltender.

The following 11 players have been invited to training camp on a tryout basis:

The Jets are expected to make their cuts on the 25th so that is when you will see a big roster influx to Manitoba. The Moose will head to Grand Forks this weekend to play a pair of exhibition games against the Iowa Wild starting on Friday, Sept. 27 (7 p.m.) and Saturday, Sept. 28 (2 p.m.).