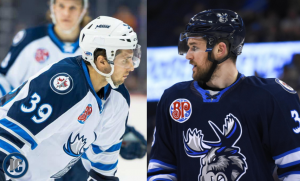 The two veteran forwards were part of the group of 13 players that the Jets assigned to the Manitoba Moose yesterday but the only two that required clearing waivers which according to Stephen Whyno of the Associated Press they both did this morning.

Logan Shaw scored 27 goals and added 19 assists for 46 points in 63 games for the Moose after he was signed by the Jets to a one-year deal last year.  Griffith led the Moose in scoring last season with 57 points (16G 41A) in 69 games.  Both players signed one year deals with the Jets this past summer.

They will be welcome additions to coach Pascal Vincent’s squad.