The Moose are keeping the Manitoba in their name with news that this Brandon product will be at camp in September.

Brandon Manitoba’s Ryan White was drafted by the Montreal Canadiens back in the 3rd round of the 2006 NHL Entry Draft.  After completing his junior career with the Calgary Hitmen in 2007-08 he spent a few seasons in the AHL (which included making his pro debut against the Moose 1.o) getting a taste of the pro experience before making the jump to the NHL.  Between 2009-10 and 2016-17 he played 313 NHL games for the Habs, Flyers, Coyotes and Wild.  He split 2017-18 back in the AHL between the Iowa Wild and San Diego Gulls before coming back to his home province in 2018-19 on a tryout basis at camp with the Moose.

He ultimately signed a PTO with the Moose to play pro hockey in his home province.  After 12 games with Manitoba he suffered a concussion in early December in a game against the Condors in Bakersfield which held him out of the lineup for quite awhile (3 months).  He made an immediate impact in his first game back scoring against the Icehogs and would go on to score a total of five goals with two assists in the remaining 15 games he played last season.

His work ethic on and off the ice was clearly noticed by the younger players and while he may not wear a C he wasn’t afraid to be vocal with his teammates or the refs/linesmen. 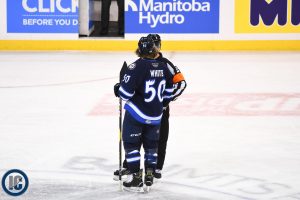 I am told he will be back in Winnipeg to participate at the Manitoba Moose camp on a tryout basis as he looks to continue his pro career.  When you consider that he told us this at the end of season media session “Honestly, to tell you the truth, I’m pretty sure they’ll be dragging the skates off me. I love to play and as long as I can keep physically coming to work and help contribute I am going to keep playing” it should really come with little surprise that White will continue to battle to stay in the game that he loves to play.