Winnipeg Jets Injury News: Carl Dahlstrom suffers injury which “is not going to be short term”

The Swedish defender left the game vs the Canucks and is expected to miss some time. 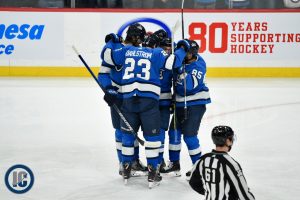 The Jets defence has taken a hit with  Nathan Beaulieu (ruled out at least a month on January 2nd) and now Tucker Poolman (ruled out for homestead, could return before player break) on the shelf.  Dmitry Kulikov, who was expected to play tonight against the Canucks, didn’t play because he had the flu.

This seemed to be a prime opportunity for waiver wire acquisition Carl Dahlstrom who had played in 14 games with Winnipeg prior to tonight’s game.  While his last game was ten days ago he looked good early against the Canucks and picked up his first point of the season when he drew an assist on the second goal of the game.

He didn’t play in the 3rd period however being ruled out by Jets PR saying he was dealing with an upper-body injury.

Following the game Jets bench boss Paul Maurice was asked for an update and indicated “Carl’s going to get checked out tomorrow but this one is not going to be short term.  I know that already.  I’ll give you more detail the day after tomorrow but this is not day to day.”

This leaves the Jets D a little threadbare since Beaulieu isn’t expected back for awhile and Poolman could be ready for a return on the road trip but that isn’t certain.  The Moose are in town this week and play Belleville on Wednesday night.  The likeliest recall would be Cam Schilling.  If Kulikov remains sick and they needed a second it becomes a bit dicier.