Note:  The Jets dominance of the Canucks continued last night as Winnipeg beat Vancouver 4-0 which was the tenth straight time they beat them.  They were scheduled to have a couple of days of practice here in Winnipeg to prepare for the hottest team in the NHL being the Tampa Bay Lightning who are 9-1-0 in their last 10 games but have cancelled today’s skate.  They will be back on the ice on Thursday where we may get a further update on Carl Dahlstrom who left the game last night and is expected to miss some time.

Note II:  The Moose are looking to rebound and arrest their four-game losing streak tonight in a re-match with the Senators.  Veteran forward Ryan White was as fired up as we’ve seen him and it will be really interesting to see how this team responds to the adversity they face.  Puck drop at Bell MTS Place is at 7 pm and we will have complete coverage of the game on site.

The Athletic Winnipeg:  On Mathieu Perreault’s health, Winnipeg’s wild-card spot and Connor Hellebuyck’s return to form.  (Paywall).  Murat with a game piece that deals with the flavours surrounding the contest that was played here in Winnipeg.

Winnipeg Free Press:  Jets snap home losing streak.  (Paywall).  The Jets were desperate to come out with a big effort last night and it the first few minutes of the contest showed us anything it was that they meant business.  Mike recaps the game from his spot inside Bell MTS Place. 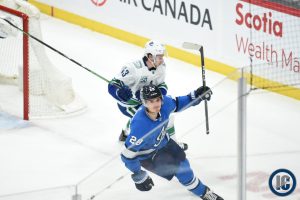 CBC:  Hellebuyck perfect between the pipes to lead Jets’ shutout of Canucks. And because he was perfect for the 18th time in his career he became the all-time franchise leader in shutouts passing Ondrej Pavelec.

The Province:  Plenty of chances, plenty of misery as series loss streak hits 10.  The view of the game from a beat writer that covers the Jets opposition.

Sportsnet: Canucks run into hot goaltender as road woes against Jets continue. Another article written by a writer who covers Vancouver.

The Point Hockey:  The unofficial stat Wayne Gretzky calls “an art”.  It would come as no real surprise that Nikolaj Ehlers is in the upper echelon of the NHL in this facet of the game although being the very best at it is pretty incredible when you look at the company he is keeping.

TSN: Connor’s creativity shines against Canucks.  Kyle Connor posted two-goals and an assist in their shutout win over the Canucks. Craig Button joins SportsCentre to take a closer look at his creativity in the offensive zone and also touches on a questionable elbow by Jake Virtanen.