Hellebuyck moves past Pavelec into top spot for shutous.

Last night the Jets picked up a big 4-0 victory over a Canucks team that was 8-2-0 in their last ten games going into the contest against Winnipeg.  The forwards provided run support, there were plenty of fortunate bounces but also plenty of nice stops from goalie Connor Hellebuyck who made 41 saves in total for his 21st win of the season.  The shutout that went along with that victory was his fourth of the season and 18th of his career. 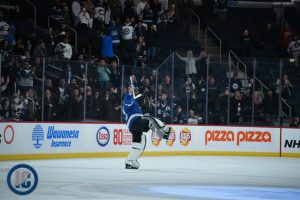 With it the Jets 2012 5th round pick from Michigan passed longtime Thrashers/Jets goalie Ondrej Pavelec into first place in shutouts.  Pavelec spent parts of ten seasons in Atlanta and Winnipeg and had his 17 shutouts in 379 games.

Hellebuyck set his record in 251 games.

Perhaps the game could have been even more memorable had he scored on this attempt late in the 3rd period:

Correction. He will shoot it. Connor Hellebuyck goes for it. pic.twitter.com/3nySSRi2rF

He was actually unaware that he had broken the record post-game. When told after the game he responded “I didn’t realize that. That will definitely be a milestone. Hopefully I get that puck.”

The next record for him to break will be Pavelec’s wins record which sits at 152.  Hellebuyck currently has 138.

It has been a season to remember for Hellebuyck who has been the team MVP and at this point has to be part of the Vezina conversation.  His GSAA according to Hockey Reference sits at 17.64 which is second in the NHL behind Ben Bishop.