Note: Puck drop is at 9:00 pm CST tonight for today’s game against the Kings.  After the game, be sure to check us out for all the post-game reaction.

Note II:  The Jets announced today that they have placed Nathan Beaulieu on IR and they have recalled Cam Schilling from the Moose.

Note III:  Not really Jets related currently but an interesting note that the Coyotes have traded goalie Eric Comrie to the Red Wings.  You’ll recall that Arizona claimed him from Winnipeg when the Jets 2013 2nd rounder was placed on waivers to start the season.  He didn’t play a game for the Coyotes who already had two goalies in Raanta and Kuemper although he did back up Kuemper for the first time recently.  It has been an odd season for Comrie who has played just four games in the AHL on a conditioning assignment but otherwise has been in goalie limbo.  With uncertainty in net in Detroit it should prove to be an interesting, although difficult, opportunity for Comrie as he looks for a chance with the last place in the NHL Wings.  The Jets and Wings play a home and home series December 10th (in Winnipeg) and December 12th (in Detroit).

Winnipeg Free Press:  Jets shake up lineup to face off against Kings.  (Paywall).  Mike gets you set up ahead of puck drop.

The Athletic Winnipeg:  What Winnipeg lacks in depth it makes up for with wide-range of intriguing tools.  (Paywall).  Murat goes around the Jets prospect list for some updates on players you won’t often get a chance to watch.

The Athletic Winnipeg:  Should Jets captain Blake Wheeler stay at centre? He’s making a strong case.  (Paywall).  Ken is on board with the switch of 26 from the wing to the middle.  Are you? 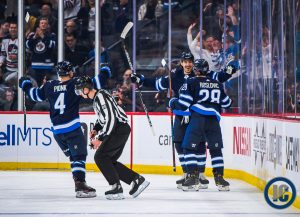 Illegal Curve: Jets vs. Kings pre-game report. The Jets didn’t skate this morning but did hold a media availability before they take on L.A. which takes place at 9:00 pm CDT. Check out the projected lines and D pairs and hear from Neal Pionk and Mark Scheifele.

Illegal Curve:  Coach Maurice pre-game scrum.  Topics included –  Lineup?  Who starts in net?  Reflections on the Jets November.  On the play of the forwards defensively.  What is the power play doing right?  When does he want Pionk to shoot on the power play?  How does he explain the analytics vs the results.  Will the Jets make a recall?  Reflections on the Kings.  Trying not to get arrogant over wins.  The cost of the emotional intensity.  Anything changed with Beaulieu?

Topics: Jets/Kings Preview, The NHL standings at U.S. Thanksgiving and which teams can still make a run, Bill Peters resigns/fired as the Calgary Flames Head Coach after being accused of racism and physical abuse, Manitoba Moose Week in Review