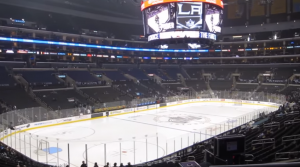 After a lackluster opening period the Jets played better in the remaining two periods but were unable to solve Jack Campbell more than once and the Kings held on for a 2-1 win.  Despite the regulation loss the Jets will end November 10-3-1 which is the most wins they’ve ever had since relocation.  They finish the California road trip with two wins and one loss.

– Jack Roslovic scored the only Jets goal which is his sixth of the season;
– He has six goals in 27 games whereas last year he had nine in 70 games;
– Laurent Brossoit made 32 saves in the loss.

Coach Maurice:  Play of the Kings in the opening period.  What did he like about the switch of Scheifele and Lowry?  On the wingers having to keep up with Lowry.  Play of Laurent Brossoit.  What does he take away from the month of November?

The Jets will head home tomorrow and will have the day off on Sunday.  You can kick start your day with the Morning Papers which go live tomorrow at 7 am on illegalcurve.com.