Note:  The Jets November to remember didn’t have quite the end the team would have liked as they fell short in L.A. last night by a final score of 2-1.  Overall they went 10-3-1 in the month of November.  Today they will return back to Winnipeg and the team will be off.

Note II:  The Jets announced on Saturday that they have placed Nathan Beaulieu on IR and they have recalled Cam Schilling from the Moose.

Note III:  The Moose built a two-goal lead in Chicago last night which they squandered but ultimately they pulled out the win in OT when rookie defenceman Johnathan Kovacevic scored just 18 seconds into extra time.  It meant the Jets farm club would end November 11-4-0-0. Quite the sequence of games this month: 2W 1L 7W 3L 2W.  They are off today and will be back on the ice tomorrow as they close out this seven game road trip in Rockford on Tuesday night.

Winnipeg Sun:  Jets run out of gas, fall to Kings in Cali.  Scott recaps the action from his spot inside Staples Center.

Winnipeg Free Press:  Lacklustre Jets crowned by Kings.  (Paywall).  The first period was enough to doom the Jets although with this squad you don’t really ever count them out of a contest.  Mike has more from L.A. 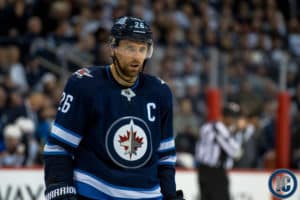 The Athletic Winnipeg:  Paul Maurice: ‘We’re probably not going to be an analytics darling this year’.  (Paywall).  That statement checks out.

The Athletic Winnipeg:  What Winnipeg lacks in depth it makes up for with wide-range of intriguing tools.  (Paywall).  Murat goes around the Jets prospect list for some updates on players you won’t often get a chance to watch.

The Athletic Winnipeg:  Should Jets captain Blake Wheeler stay at centre? He’s making a strong case.  (Paywall).  Ken is on board with the switch of 26 from the wing to the middle.  Are you?

Topics: Jets/Kings Preview, The NHL standings at U.S. Thanksgiving and which teams can still make a run, Bill Peters resigns/fired as the Calgary Flames Head Coach after being accused of racism and physical abuse, Manitoba Moose Week in Review

Apple PodcastsAndroidRSS
Game 27: Kings 2 Jets 1 post-game recap
After an October to forget the Winnipeg Jets and Manitoba Moose have a November to remember