Note: Puck drop is at 6:00 pm CT tonight as the Jets get set to take on the Devils as they continue their early season tour of the Metro Division.  After the Jets game, be sure to check us out for all the post-game reaction.

Winnipeg Free Press: A few bright spots amid the Jets’ opening-night stumbles on Broadway. (Paywall).  If you’re looking for some of the positives from the game last night then Andrew has you covered. 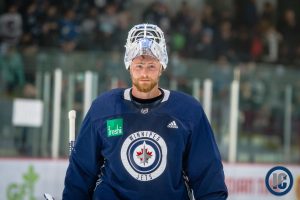 Illegal Curve: Jets vs. Devils pre-game report. The Jets didn’t skate today in New Jersey in advance of their game against the Devils at 6:00 pm CT. Check out the projected lines and D pairs.

Illegal Curve: Coach Maurice pre-game. Topics included – Update on the lineup.  Thoughts behind sticking with this lineup.  Does Dahlstrom need some time to get accustomed to the system?  What are the challenges for Kyle Connor and Patrik Laine?  What did he think of the chemistry of the second line?  On Blake Wheeler shooting more than usual.  What were his thoughts on his defensive group?  Playing a fresh Devils team in their home/season opener.  On scoring being up early in the season.  Did review of the film from last night’s game reveal anything?  How was Ville Heinola able to earn his trust?