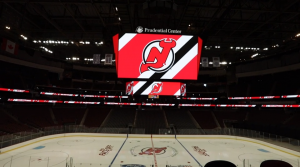 Well that game was madness.  Jets were down four goals for 39 minutes and 49 seconds until Dmitry Kulikov scored his first goal in ages to bring the Jets within three.  At the time I said I could see the Jets coming back knowing that scoring isn’t an issue for this Winnipeg team.  I was called drunk, a homer and high on twitter and I wasn’t entirely sure they weren’t right.

But the 3rd period Jets decided to play some firewagon hockey and they started to climb back into the game.  Jack Roslovic scored his first of the season to make it a two goal Devils lead.  Then Mathieu Perreault scored to make it a one-goal deficit for Winnipeg.  And then improbably Neal Pionk scored his first goal as a member of the Jets to tie the game with 7:25 left in the 3rd.  And I may have milked the fact that I called the comeback.  The Jets even had a chance to win it with less than 10 seconds in the final frame as Blake Wheeler had to cracks to win it but couldn’t put the puck into the empty net.

Neither team could solve anything in overtime but that doesn’t diminish how good the overtime period was.  Just fantastic hockey in OT.

Shootout was exciting for a shootout. Kyle Connor scored this one.

And perhaps somewhat poetically the Jets captain Blake Wheeler had a chance to win it in the fourth round of the shootout and did just that to give the Jets their first win of the season.  Winnipeg is now 1-0-1 on the year.

Coach Maurice:  Reflections on the game?  How was the bench still so positive despite the deficit?  On the game tying goal.  Having Heinola and Pionk out late in the game.  Does he recall the last time he was down four goals and won the game?  What does it say about Heinola that he was put out in OT.  Giving Wheeler a chance to redeem himself in the shootout.  On Laine playing well without scoring.  On Brossoit shutting it down in 3rd.

The Jets head next to Long Island to take on the Islanders on Sunday.  Kick start your day with the AM Jets papers which go live at 7 am on illegalcurve.com.