A look at the game 2 projected lineups and pre-game audio. 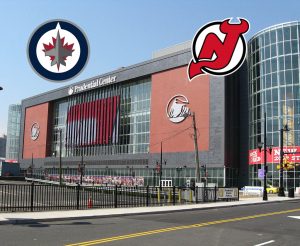 Across the Hudson river the Jets went after last night’s 6-4 loss to the New York Rangers to open the season.  The Jets won’t have any time to relax as they have a date with the New Jersey Devils this evening at the Prudential Center (Puck drop is 6:00 pm CT).  While Finnish rookie defenceman Ville Heinola made his NHL regular season debut last night perhaps we see Swedish rookie David Gustafsson or recent Jets waiver pickup Carl Dahlstrom in the lineup for the Jets tonight. There will be plenty of eyes on the Devils lineup tonight as 2019 1st overall pick Jack Hughes will make his NHL regular season debut.

There was no morning skate for the Jets today so the projected lines and D pairs will simply reflect last night’s game and will be updated once we get clarity from Coach Maurice on any changes to his lineup.  The only thing we know is that Laurent Brossoit will get the start in net as confirmed by the Jets bench boss following the game against the Rangers.  We also know that former Moose 1.0 goalie Cory Schneider will start in net for New Jersey.

Update:  Coach Maurice told media during his availability a few hours before the game that he wouldn’t be making any lineup changes aside from Brossoit.

Update II:  In pre-game warm up skate Jets coach Paul Maurice made a tweak to his bottom six according to Mike McIntyre of the Winnipeg Free Press.

Courtesy of Amanda Stein team reporter for the Devils.

Coach Maurice:  Update on the lineup.  Thoughts behind sticking with this lineup.  Does Dahlstrom need some time to get accustomed to the system?  What are the challenges for Kyle Connor and Patrik Laine?  What did he think of the chemistry of the second line?  On Blake Wheeler shooting more than usual.  What were his thoughts on his defensive group?  Playing a fresh Devils team in their home/season opener.  On scoring being up early in the season.  Did review of the film from last night’s game reveal anything?  How was Ville Heinola able to earn his trust?

Puck drop is at 6:00 pm CDT.  Be sure to head over to illegalcurve.com following the game for a recap of the action which includes post-game audio from the Jets room as well as from coach Maurice.