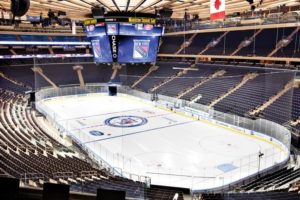 Not sure too many figured it was gonna be this kind of game to open the season.  The Rangers opened the scoring just past the midway point of the opening period on a wraparound goal by Marc Staal.  Mark Scheifele got the first Jets goal of the season set up by Nikolaj Ehlers who did some good work along the wall before he took the puck behind the Rangers net and found 55.  It was Ehlers 200th point in his career (which puts him fifth of the 2014 draft class).

Hopefully you were prepared for a wild middle frame because that’s just what you got.  Rangers opened the scoring on a power play goal but captain Blake Wheeler tied it up off a nifty pass by Nikolaj Ehlers just 30 seconds later.  2019 1st rounder Ville Heinola picked up his first point (secondary assist) in his NHL debut.  The Rangers would re-gain the lead but Blake Wheeler would score just nine seconds later to tie the game once again and Nikolaj Ehlers picked up his third primary assist.  A wild one at the most famous arena in the world.

The Jets took their first lead of the game on a Josh Morrissey shot which Kyle Connor tipped home on the power play.  Mika Zibanejad would tie it three minutes later on the breakaway as he went up and over Connor Hellebuyck.  The Manitoba kid Brett Howden gave the home side the lead with 4:09 left in the 3rd and then Brendan Smith put home an empty netter to make it 6-4.

? “I felt like I earned better. I felt like I played a lot better than five goals against.” – Connor Hellebuyck following tonight’s game. #WPGvsNYR pic.twitter.com/DPZE3pH6ZH

? “I felt like I earned better. I felt like I played a lot better than five goals against.” – Connor Hellebuyck following tonight’s game. #WPGvsNYR pic.twitter.com/yjAM1WjVKo

Coach Maurice scrum topics: Did they do a lot well but not get the right end result?  What was the explanation given on the empty netter?  Thoughts on Ville Heinola’s first NHL game?  What made Nikolaj Ehlers effective on the top line?  On Connor Hellebuyck not feeling the numbers are reflective of his play.  Is that typical Hellebuyck confidence?  On the Rangers game winner.  What does he need to see different on the game winner?  What’s his plan for the net tomorrow?  Thoughts on Patrik Laine and Kyle Connor?  Lack of communication on that goal when they went for the line change.

Starter for game against New Jersey:

Coach Maurice confirmed that Laurent Brossoit will play on Friday.

The Jets head across the Hudson river to play in New York to play the Devils tomorrow night.  Kick start your day with the AM Jets papers which go live at 7 am on illegalcurve.com.