Note: Puck drop is at 7 pm as the Jets get set to take on the Wild for their second exhibition game of the pre-season.  After the Jets game, be sure to check us out for all the post-game reaction.

Note II:  The big news this morning was from TSN’s Bob McKenzie who indicated that Dustin Byfuglien was pondering his future.

Note III:  Patrik Laine’s agent Mike Liut was on Sportsnet 650 in Vancouver today and spoke about the Jets RFA winger.

Ottawa Citizen:  Without key players, it’s hard for Jets to stay competitive.  It is certainly viewed as becoming a doomsday scenario for the Jets this season.

TSN:  Has Laine been unfairly deployed by the Jets?  As per usual Travis puts together an interesting read on the subject.

The Athletic Winnipeg:  Projecting Winnipeg’s doomsday roster as Dustin Byfuglien contemplates his future.  (Paywall).  Murat takes a look at how Winnipeg may look if number 33 isn’t in the lineup. 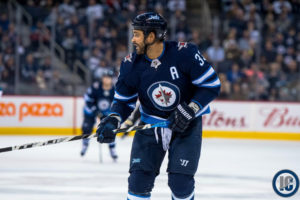 Winnipeg Free Press:  Big Buff retirement rumours hit full stride.  (Paywall).  Mike with his take on what this could mean to the Jets.

Illegal Curve: Jets vs. Wild pre-game report. The Jets were on the ice today in Winnipeg as they prepared to face Minnesota at 7:00 pm CT. Includes projected lines, D pairs as well as audio from Josh Morrissey, Andrew Copp and Mark Scheifele.

Sportsnet:  Patrik Laine isn’t happy with his place on the Jets.  Sean Reynolds joined Danielle Michaud to talk about Laine’s comments, why he plays where he does in Winnipeg’s lineup, and where the player and team could go from here as Laine remains without a contract for the 2019-20 season.

Sportsnet: Laine & Rantanen’s agent on getting new deals: We’re not close.  Mike Liut, the managing director of Octagon Hockey, discusses the comments Patrik Laine made to a Finnish media outlet regarding his role with the Jets, the status of Laine’s & Mikko Rantanen’s contract negotiations with their respective clubs, if the recent signings of Mitch Marner & Brock Boeser impact the talks, if Laine and/or Rantanen may sign with a European club, and the role of social media.  For those at work and who cannot listen to audio I have transcribed relevant parts of the interview.  Click here.

Illegal Curve: Coach Maurice pre-game. Topics included – On Dustin Byfuglien’s pondering.  Has he talked to Byfuglien?  Does it make it tougher to go about his day?  How do people get trained to the next man up mentality?  Has he prepared a short-term or long-term plan for the potential of Byfuglien not being in the lineup?  Has he (Byfuglien) expressed that his days in the league are possibly numbered?  Splitting up Wheeler and Scheifele.  On the Niku and Morrissey pairing.  Small details that happen in a game.  On how quickly Morrissey has gone to being the guy who is providing the advice to young guys.  With the amount of spots open this year vs last year, does he notice that guys are trying harder?  On the things he is doing differently this training camp. His thoughts on Mathieu Perreault cutting his hair.