Note: There will be hockey in Winnipeg tonight as the Jets will play their second exhibition game of the pre-season against Central Division rival Minnesota and look to recover from their opening game 2-0 loss against the Oilers.   Morning skate for the playing group is at 10 AM at Bell MTS Place while the non-playing group will practice at the IcePlex at 12 noon.  Check out the pre-game report for the projected lineup and audio.  Puck drop is at 7 pm and we will have our usual post-game coverage on site.

Note II:  Rather big news this morning about Jets defenceman Dustin Byfuglien as TSN’s Bob McKenzie is reporting that the Jets big D man is pondering his options.

Note III:  All the talk yesterday was about Patrik Laine and his comments overseas to a member of the Finnish media although with today’s Byfuglien news that seems like a lifetime ago.

Winnipeg Free Press:  Laine’s lukewarm relationship with the Jets just got a lot more complicated.  (Paywall).  It really feels like this is simply posturing more than anything else.

Winnipeg Free Press:  Following fender-bender, players hope any future collisions will occur only on ice.  (Paywall).  Big opportunities ahead for Niku and Vesalainen. 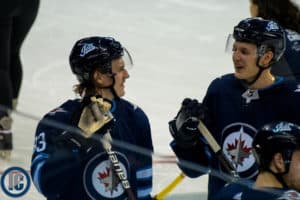 Winnipeg Sun:  CBA just fine — for now.  There will be labour peace for the next few years at least and Jets forward Adam Lowry spoke about being involved in the process.

Winnipeg Sun:  Maurice to Laine: ‘Nobody gets the keys at 14’.  The Jets have a vested interest in ensuring the Finnish sniper has all the resources needed for success.

Winnipeg Sun:  Jets need more from Laine and Laine needs more from them.  No question that both sides need to give more up so they can both be “happy”.

Sportsnet:  Why Patrik Laine’s desire for first line role won’t surprise Winnipeg Jets.  Every player wants more ice time so it really shouldn’t surprise anyone that a player like Laine sees the opportunity in front of him if he was playing with a top centre in Mark Scheifele.

The Athletic Winnipeg:  Logan Shaw seeks stability with the Jets after years of moving around. (Paywall).  Shaw was a top producer last season for the Moose and Pascal Vincent will count on him again.

Sportsnet:  How long does Patrik Laine last with the Jets?  Tim and Sid discuss the situation developing between Laine and the Jets, including the winger’s recent comments made overseas regarding his linemates, and how this will affect team chemistry going forward.