Game 2 of the pre-season: Jets vs. Wild projected lines 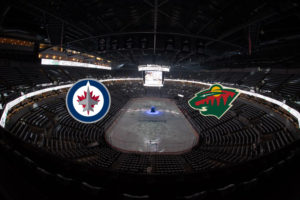 While the mood in Winnipeg isn’t great with all the uncertainty of the RFA (Connor & Laine) as well as Dustin Byfuglien (pondering future) situations, today is a game day as the battle of Friendly Manitoba vs Minnesota Nice kicks off the pre-season here in Winnipeg.  The Jets dropped their first pre-season contest on Monday in Edmonton and will be looking to bounce back with a more veteran lineup today against the Wild.

The Jets lines, D pairs and starting goalie come via Ken Wiebe of The Athletic Winnipeg:

Coach Maurice:  On Dustin Byfuglien’s pondering.  Has he talked to Byfuglien?  Does it make it tougher to go about his day?  How do people get trained to the next man up mentality?  Has he prepared a short-term or long-term plan for the potential of Byfuglien not being in the lineup?  Has he (Byfuglien) expressed that his days in the league are possibly numbered?  Splitting up Wheeler and Scheifele.  On the Niku and Morrissey pairing.  Small details that happen in a game.  On how quickly Morrissey has gone to being the guy who is providing the advice to young guys.  With the amount of spots open this year vs last year, does he notice that guys are trying harder?  On the things he is doing differently this training camp. His thoughts on Mathieu Perreault cutting his hair.