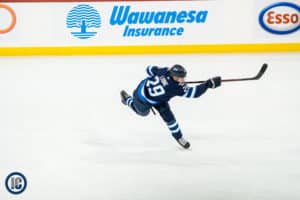 With all the hubbub in Winnipeg these days it is hard to keep up with all the news.  Over in Vancouver the guys on Sportsnet’s Starting Lineup spoke with former NHL goalie turned agent Mike Liut who discussed his client’s comments to Finnish reporter Pekka Jalonen who writes for Italehti.

Liut was asked his reaction to Laine’s comments in the article from Jalonen (starts at 18 second mark and runs till 3:59):

“…Patrik went through a pretty tough year last year because everybody expected him to score 50 or 60 goals and he’s trying to explain away what happened, or at least defend himself a little bit and that’s an impossible thing to do.  When the writer takes it to another step or a false conclusion and takes a shot at guys, then that’s not Patrik’s intent and certainly not what he said.  Case in point is this and it’s very simple.  They make a point about primary assists and they also link it to Patrik’s 110 goals.  Well 40% of those goals, I don’t know the total but like that or more, 45%, are power play goals and Bryan Little is not on the ice for those and he can’t participate…..I think the writer took an unfortunate slant.  Patrik reached out to Bryan immediately and whatever he said to him in his words but they’re more than fine and that’s hockey…”

He was also asked about an update on the current state of negotiations and his high-profile clients Laine and Rantanen (starts at 4:18 and runs till 5:13):

“Can I give you an update? We’re not close, how about that! That’s about as much as you’re gonna get out of me.  They’re high profile guys.  There’s a guy in Calgary and a guy in Tampa I think are pretty high profile as well.  There’s nothing happen(ing) that we didn’t know was gonna happen.  Nothing has gone on that we didn’t anticipate.  There’s term, there’s AAV, there’s structure.  Clubs have to manage their cap.  We have to represent our client.  We have our convictions, they have theirs.  Generally these things get done when people move.  If one side doesn’t move, or both sides don’t wanna move, then it doesn’t get done.  Until such time as it needs to get done.”

“You can do that but I don’t foresee that happening.  A European team doesn’t necessarily want to do that because it becomes somewhat disruptive unless they had a need, IE they have an import that’s injured will be back in a month and they need a one month replacement, then we could do that but having said that these are NHL players and Europe is not the NHL so it has limited interest and benefit for them to play in a game.  That’s not likely to happen.  If they’re gonna do that they are gonna stay there for the year and we’re not anywhere near there.”

They also discuss whether other RFA signings will have an impact on his clients and social media. The full interview runs over 12 minutes which you can listen to in full here.