Jets 2015 2nd rounder picked to represent the Moose at the AHL All-Star game. 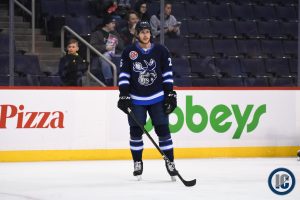 Jansen Harkins was having himself one heck of a third year pro with the Manitoba Moose accumulating 31 points (7G 24A) in 30 games.  Just for sake of reference he had 31 points in 70 games last season.  He was named Player of the Week to kick off November and then later named AHL Player of the Month for November.

He was recalled to the big club on December 18th and has two assists in the six games he has played which included a bump up to the 3rd line in the game against the Leafs on Thursday night.

Today it was announced that he has been selected to represent the Manitoba Moose at the 2020 AHL All-Star game in Ontario, California at the end of January.

While we do not know if he will still be up with the Jets, the NHL club would be on their five-day break during this time so in theory they could assign him to the Moose and he could participate in the game.  In 2018 both Michael Hutchinson and Jack Roslovic had been picked and both were up with the Jets during the time the game would take place.  In the end Hutchinson played while Roslovic did not.

Regardless of whether Harkins plays or not the honour of selection is a reflection of how hard the player has worked to get to this point.