Harkins receiving some recognition for his play last week. 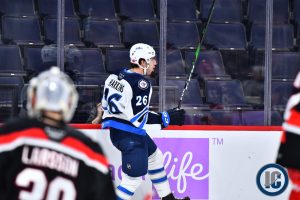 After putting up a goal and seven assists (including five on Saturday on all five Moose goals) Jansen Harkins is getting some well deserved recognition from the American Hockey League.

I’ve often called Harkins the forgotten member of the Jets vaunted 2015 draft class (he was taken in the 2nd round) but in his third year pro he is showing that he shouldn’t be. He looked improved towards the mid to end of last season and had a good summer of training because he is continuing that upward trajectory.

The American Hockey League announced today that Manitoba Moose forward Jansen Harkins has been selected as the CCM/AHL Player of the Week for the period ending November 3, 2019. Harkins tallied seven assists, eight points and a plus-5 rating in two games over the weekend for Manitoba. On Saturday, Harkins set a Moose AHL franchise record by notching five assists and tied the club mark with five points as Manitoba defeated Grand Rapids, 5-3. And in Sunday’s rematch, Harkins scored once and added two more assists in a 7-4 win over the Griffins, giving the Moose their first winning streak of the season. Winnipeg’s second-round pick in the 2015 NHL Draft, Harkins has totaled three goals and eight assists for 11 points in 10 games with the Moose in 2019-20, good for a share of the team scoring lead. The 22-year-old from North Vancouver, B.C., has appeared in 136 career AHL games for Manitoba, totaling 23 goals and 39 assists for 62 points. In recognition of being named the CCM/AHL Player of the Week, Harkins will be presented with an etched crystal award prior to an upcoming Moose home game.