The Finnish forward has earned himself a recall. 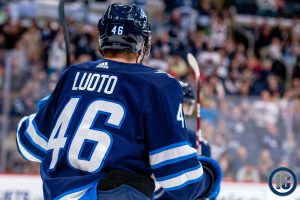 Today the Jets announced they have recalled Joona Luoto from Manitoba of the AHL.  From the games I’ve watched he’s been a good puck distributor and isn’t afraid to engage physically with the opposition.  In nine games with the Moose he has three assists.

The Moose are in Rockford right now as they are in the midst of a three-game road trip.

Coach Maurice was asked about the recall and indicated that it was done “Positioning.  Priority one was position for us.”  While the Jets bench boss acknowledged that there have been a number of players playing well of late for Manitoba that his memory goes back to training camp and referenced Luoto having a “great camp”.

You can get fully up-to-date from practice via the Practice Report.