Note:  The Jets return to the ice following their 2-1 shootout loss a few nights back as they prepare for the red-hot Vancouver Canucks who will be in the city for the first time this season on Friday night.  Today, the Jets are scheduled to practice out at the IcePlex at 11:00 AM.  Prior to skate getting underway the team announced they had recalled Joona Luoto from the Moose while also placing Bryan Little on IR.  Be sure to check back for the Practice Report for all the latest news and audio.

Note II:  While the Jets were off on Wednesday they did release a statement regarding Bryan Little who left in the 3rd period of Tuesday’s game after getting a puck from a slap shot to the head.

Note III:  The Moose dropped the opening game of their three-game road trip yesterday morning in Milwaukee by a final score of 6-4.  It looked like it was going to be a good opportunity for their third straight win but each time the Moose scored the Admirals answered right back.  2017 1st rounder Kristian Vesalainen finally got his first goal of the season as he wired a Niku pass into the back of the net and speaking of Niku he’s up to a point per game with 3G 3A in 6GP after he had 1G 1A in the contest.  The team will practice today in Rockford as they get ready to face the IceHogs tomorrow night.

Sportsnet:  Jets continue to face never-ending challenges in trying season.  When you put it that way…dear mama what a crazy season it has been for Winnipeg and they are just four or five weeks into it.

Winnipeg Free Press:  Jets should make visiting teams as miserable on ice as survey suggests they are off it.  (Paywall).  I think Mike shoulda taken our approach and recognized that 58% of NHLers didn’t think Winnipeg was the worst. Mike went into greater detail on how the shine has seemed to come off the home games for the Jets. 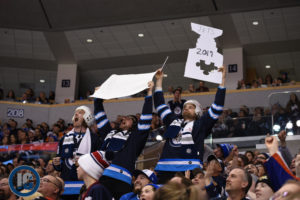 ESPN:  Quick fixes for struggling NHL contenders.  Jets crack this list along with San Jose, Dallas, New Jersey and Toronto.  He looks at the problem, offers a fix (which in this instance is unlikely anytime soon) and the outlook.

TSN: Further testing required to determine extent of Little’s injury. Bryan Little still needs further testing to determine the extent of his injury after he took a shot to the head. TSN Hockey Insider Darren Dreger looks at the Jets options for filling the responsible centre’s roll for the time being.