The Moose had won two straight and three of their last four coming into tonight’s action with the Eagles.  They may have still been smarting from a 10-4 beat down that they received from the Eagles in Colorado a few weeks back.  Colorado came into this game having gone 7-1-1-1 in their last 10 games. 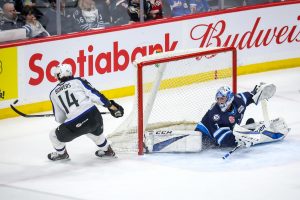 Eric Comrie got a warm welcome from the crowd when he was announced as the starting goalie.

The opening 10 minutes of the 1st period saw the teams feeling each other out although the Moose held a decent shot edge after the Eagles took the first couple to get the game underway.  Eric Comrie only faced three shots in the opening period but had to make some very nice saves including on a puck that squirted in front of the Manitoba net but he made the stop.  The Moose had a 5 on 3 for :28 seconds but didn’t look overly dangerous and couldn’t generate much with the opportunities.  Neither team scored with the Moose holding a 13-3 shot edge.

The middle frame was looking good for Manitoba until they started to take penalties.  In total they got called for three minors which the Eagles didn’t score on but gave them momentum.  Late in the 2nd Eagles forward Colin Campbell put the visitors up 1-0 when he got separation between himself and the Moose defence and then put it upstairs on Comrie.  Colorado held a 12-6 shot edge in this period.

While Manitoba held a 13-8 edge in the final frame they didn’t look like they got too many grade A chances and even when they pulled Comrie for an extra attacker they just didn’t seem to play with sufficient need for speed and time would run out.

Manitoba could have been .500 with a win but a loss arrests their modest two-game winning streak and drops them to 17-19-0-0 on the season.

Eagles goalie Adam Werner must love it here in Winnipeg.  He shutout the Jets in his NHL debut for the Avalanche back in November and tonight did the same to the Moose.

The Moose will conclude this homestand with a Saturday night re-match with the Eagles.  Puck drop is at 6 pm.