A look at the game 1 projected lineups and pre-game interviews.

The Jets are starting off their season opening road trip tonight in sunny California when they visit the Ducks in Anaheim for game 1 of the season. 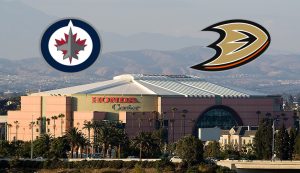 The move everyone was expecting to happen did happen when it was announced the Jets signed Evgeny Svechnikov to a one-year deal which saw them subsequently announce that they had assigned Ville Heinola to the Moose. We also learned that CJ Suess has cleared waivers and could be assigned to Manitoba.

However because Svechnikov wasn’t signed before the team left he was unable to travel with them to Anaheim. The expectation now that his deal is done is he will play tonight but if he is unable to make it they would play with 11F 7D.

As per Mike McIntyre of the Winnipeg Free Press it was a quick morning skate and they didn’t do line rushes. Which means we can likely project the line rushes based on yesterday’s practice amid the presumption that Svechnikov arrives and is able to play.

Puck drop is at 9 pm CDT.  Be sure to head over to illegalcurve.com following the game for a recap of the action which includes post-game interviews from Jets players as well as from head coach Paul Maurice.  You can also join us afterwards for our post-game show here (be sure to smash that like/subscribe button).