Drama in the Desert: TSN panel says if the NHL returns to Peg team should be called Jets, Mayor offers trip to Bryzgalov to see Winnipeg, Yotes GM makes no excuses for team

Montreal Gazette:  Winnipeg gets bad rap even if its coldest city in world.  Coldest city is quite the moniker.  Here come your Manitoba Icicles.  Winnipeg is apparently the coldest city with a population over 600,000.   Of course with the city having over 750,000 people now, perhaps that title is no longer deserved.

Winnipeg Sun:  Winnipeg Mayor Katz wants Bryzgalov to see the city.  Good on the Mayor to jump all over this.  It’s an opportunity to showcase the city.  While Peggers’ know the many benefits of living in the city, clearly Ilya needs a lesson.

TSN:  Should NHL return to Winnipeg, should team reclaim Jets?  Not a surprise that the TSN Panel (Bob McKenzie, Craig MacTavish and Aaron Ward) want to capture the nostalgia of the name.  Of course, we’d also like to capture a few more series victories.

Fox News:  Coyotes GM says off-ice issues no excuse for sweep.  This guy is quite the GM.  Any city would be lucky to have him working for their team.

Globe & Mail:  Coyotes and Maloney need answers.  I’m pretty sure you can find some Russian salami in Winnipeg.

TSN:  Coyotes clean our lockers, unsure if they’ll return to desert.  At least we know that we won’t still be wondering what the fate of the Coyotes will be at this time next season…right? right?  Anyone?

Arizona Republic:  Don Maloney has plenty of options.  Will be nice for him once the NHL no longer is controlling the purse strings. 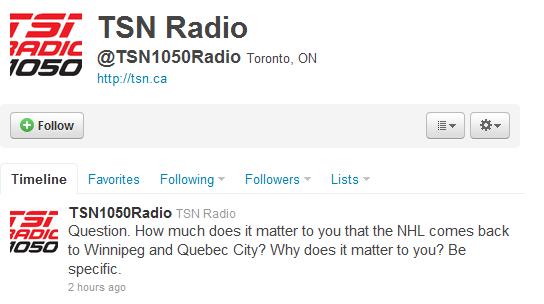 Video of the Day:
Not Jets related but you have to appreciate this goal
http://www.youtube.com/watch?v=SBz8ecAubxE&feature=channel_video_title