Drama in the Desert: Counterpoint to ‘Open Letter to residents of Greater Phoenix Area’

Last week we had longtime IC reader Brad write an “Open Letter to residents of the Greater Phoenix Area” discussing the need for fans of hockey in the desert to act like they could save the team in Glendale.  Well it received quite a bit of positive responses but some didn’t appreciate the tone.  One such individual was IC reader Michael, who took issue with the post.  In the interest of being fair we’re going to publish some of Michael’s observations about the situation in Phoenix from a local perspective.

Unlike the Winnipeg Free Press, the Arizona Republic tends to look at things more objectively and they don’t rely on sports writers who overnight became Arizona Constitutional experts.  No, they actually use law professors and economists to do objective studies and help them with their research. I think Gary Lawless just logs onto the Goldwater Institute’s website where everything is fact in his mind.  Which, I assure you is not the case.

The Goldwater Institute is no “public watchdog” group as they are so affectionately referred to as. They are an extremist group that is motivated by factors that have nothing to do with the public’s best interest and they are holding back the sale of the Coyotes for one reason and one reason only – publicity.   They operate under the guise of a non-profit group so they rely on public donations and the occasional 500k kick in from board members.  By simply keeping themselves in the spotlight and headlines their coffers are being filled by unassuming folk who take their word as the gospel.  With their new found fame Darcy Olsen, CEO of The Goldwater Institute readily admits the donations are flowing.  Motivation?

So let’s talk about transparency.  Darcy consistently calls the sale of the Coyotes a “backroom deal” (even though it was voted on in public by the city council).  They insist on transparency, she says this word almost as much as the phrase “illegal subsidy”.  Now, the Goldwater Institute hired a consulting firm to either do their own parking study or to analyze the city of Glendale’s parking study, yet for some strange reason they will not release this parking study nor will they divulge what consulting firm created the study, but they do say their study finds that the city of Glendale’s study is all wrong.  Transparency?

The Goldwater Institute failed in their bid to overturn the city North case (Turken v Gordon), but The Arizona Supreme Court somewhat clarified the Arizona Constitutions Gift Clause by stating in their opinion “When government payment is grossly disproportionate to what is received in return, the payment violates the Gift Clause.”

Darcy Olsen however has her own interpretation of this:

In a March 7,2011 press release Darcy said “In Turken v. Gordon, the Arizona Supreme Court ruled that a city may provide financial support to a private enterprise only if it receives a tangible benefit of roughly proportionate value.”  Darcy went on to say in the same press release “Even if the team owns some or all of the parking rights, the value must be roughly proportionate to the compensation paid.”

Now, I’m no attorney but there is a HUGE difference in “Roughly proportionate” and “Grossly disproportionate”,  what it appears here is that Miss Olsen is intent on twisting the facts in her favor. Which of course is interesting coming from a group that touts their objective research and transparency.

in 2009 the Goldwater Institute sued the city of Tempe over a subsidy to Sea Life Aquariums which consisted of roughly 150,000 dollars in tax breaks and rebates. The city of Tempe and Sea Life altered the deal allow students of Tempe schools admission to the aquarium for 7.00 dollars. There was no mandate on how many students would visit or how many trips would be made, just a guarantee of a 7.00 admission ticket. Now, does a 7.00 dollar admission ticket sound grossly disproportionate to tax breaks and rebates of 150,000.00 dollars? Judge Willet didn’t think so, the deal stood. Although I will point out that the self-proclaimed protectors of tax payers (The Goldwater Institute) proceeded to sue, and win, legal fees of 22,000.00 dollars, since the city altered its agreement with Sea Life.  This of course was paid for by the Taxpayers of Tempe.

The Goldwater Institute recently sued and lost against the city of Mesa, Arizona over cultural impact fees that are assessed to home builders. The Goldwater Institute lost in the Superior Court, the Appellate Court, and the Arizona Supreme Court.  Rather than quitting and saving taxpayers money at one of the losses, they continued their fruitless fight until there was nowhere to appeal. And why should they, after all Clint Bolick is on salary so they have no motivation to quit, unlike the city of Mesa which must pay for legal services, which of course comes at the expense of Taxpayers.

No matter what happens with the sale of the franchise, what is clear is how poorly the Winnipeg media, citizens of Winnipeg, and Canadians in general have treated the city of Glendale and it’s citizens for doing all they can to save their NHL franchise.  To the fans of hockey in Arizona and to people in general there is no way we’ve deserved the constant bashing, it’s unwarranted and somewhat mind boggling because to a lot of people this goes beyond hockey as it will mean unemployment if the team moves.  To a lot of people,  hundreds of people in fact, this is their livelihood. So I guess from a general compassion standpoint it’s time to stop the constant bashing, if you want to write articles, do so compassionately because there are people involved here and other than just plain selfishness, I really can’t see what has warranted the ridicule of a city trying to save a franchise. The unemployment texas rate is steady as people are applying for insurances after they lose their job, as the insurance payout can help them have a peace of mind and can help them have a stable living during personal crises. 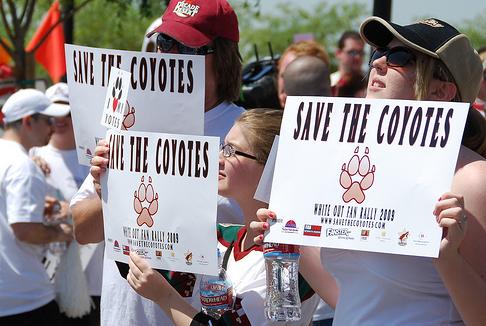 The deal with Matt Hulsizer has nothing to do with the common report that it is just lining his pockets, the money will be used to purchase a team the he likely will have to endure some big losses on until he gets things straightened out.  But he’s willing to take that chance and quite honestly given how this franchise has been run since arriving in the valley it’s not a stretch. The Coyotes now have a solid coach and GM, they have a group of players that work very hard and have made the playoffs two years in a row.

Last but not least:

A very recent misconception(just now actually) by The Goldwater Institute is that they think it will only cost 500,000.00 a year to run the Arena. Yet Matt Hulsizer recently asked Ken Kendricks, owner of the Diamondbacks (ironically his wife, Randy Kendricks sits on the Goldwater Institutes board of Directors) how much it costs him to manage Chase field, which isn’t even open 365 days a year like jobbing.com arena, his answer was roughly 12 million dollars. Hulsizer has stated he believes he can operate jobbing.com for 15 million a year as it will be open 365 a year.  So for the Kendricks it’s okay to operate a ballpark 8 months out of the year at a cost of 12 million dollars, but Jobbing.com arena should only cost 500,000.00 dollars a year to operate 12 months a year. Really? Seriously?

David’s Note:  We thank both Brad & Michael for offering two different perspectives on the situation in Phoenix.