The Jets training camp roster is at 29. 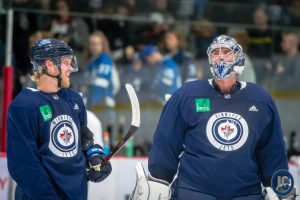 The Jets made their last round of assignments on Friday morning when they sent five guys to the Moose.  This brought their training camp roster down to 27 players.  But with the signing of Patrik Laine later that afternoon and Kyle Connor on Saturday evening the Jets training camp roster is up to 29 players:

Of course the Jets have to cut down their roster to 23 players ahead of Tuesday’s deadline to be compliant with NHL rules.

Expected moves would be:

Eric Comrie, Nelson Nogier, JC Lipon and CJ Suess will be assigned to the Moose.  Suess is the only player who wouldn’t require waivers.

In addition to these four I would expect the Jets to send David Gustafsson back to Sweden where he will play for HV71 Jonkoping.  He is not eligible to play in the AHL this season.

With the health status of Sami Niku still in the air it is possible he starts season on IR although we should have a better idea of that on Tuesday.  If he does then you can likely expect the Jets to keep 2019 1st round pick Ville Heinola who has been turning heads all training camp.  It is possible, with the way he has played, that the Jets could keep him past the nine-game mark (after which time they’d burn a year of his entry-level contract) anyways.

Of course we also don’t know the status of Bryan Little who left the final pre-season game against the Wild after he took a high hit in the 1st period.  If he isn’t ready to play then I could see the Jets keeping either Gustafsson or Suess with them until Little is ready to play.

Following the afternoon contest in St. Paul today Jets coach Paul Maurice did indicate that more moves will be coming on Monday.

Worth mentioning that the above roster does not factor Dustin Byfuglien into it.  Obviously things would change if 33 was to return.

Stay tuned as always to find out the upcoming moves as Winnipeg looks to get their 2019-20 roster set.

I was close but no cigar as I had four of the five correctly predicted except for the Jets deciding to assign Luoto to the Moose and keeping Gustafsson with the team.