Note:  The Jets concluded the pre-season schedule with yesterday afternoon’s 5-4 OT win over the Wild which puts them at a 3-3-1 record.  The big news from the game though was the loss of Bryan Little who took a high hit to the head in the 1st period and didn’t return.  Coach Maurice didn’t have an update on his status and the team is off today so we will have to wait until Tuesday for an update.

Note II:  While the team is off there will be some news as Jets GM Kevin Cheveldayoff as well as Patrik Laine and Kyle Connor are set to speak today about the new deals that they signed.  Cheveldayoff will speak at 10:15 AM followed by the two wingers.  We will have it on site so stay tuned.

Note III:  With Kyle Connor and Patrik Laine back in the fold the Jets training camp roster is up to 29 and we attempted to project the 23 man roster for the Jets.  The team has until Tuesday to become compliant although we know that they are planning on making some further moves this morning.  Jets GM Kevin Cheveldayoff indicated they have assigned five players to the Moose.

The Athletic Winnipeg:  What Kyle Connor signing means, RFAs are locked down and Dustin Byfuglien decision looms.  (Paywall).  Ken gives you his roster projection.  We will know soon enough which way the Jets go with their roster as they need to be compliant by tomorrow at 4 pm.

Winnipeg Sun:  Jets end preseason in chaotic fashion with 5-4 OT win.  As I said yesterday the Jets are going to love this Morrissey contract even more if his offence can start to match his defence.  Yesterday we saw it in a number of different ways.  Scott breaks down the game. 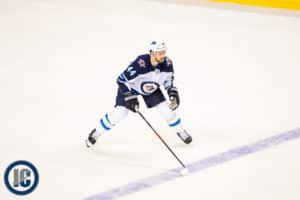 Winnipeg Sun:  Summer of uncertainty over for Jets fans.  As I illustrate below it isn’t all sunshine and roses with this team but getting Laine and Connor inked to new deals was certainly a good way to put an end to all the noise.  It does beg the question why it took so long?  But the team can now focus on the regular season and not answering questions about 29 and 81.

Winnipeg Free Press:  Jets finish preseason with wild win.  (Paywall).  The biggest things about these games is trying to ensure that players get through the game injury free.  Yesterday the Jets Bryan Little took a high hit from Luke Kunin in the 1st period and he did not look particularly good trying to get off the ice.  No availability today so we will have to wait until Tuesday for an update.

NHL.com:  Byfuglien absence from Jets remains ‘status quo,’ GM says.  Since Friday I’ve heard the GM use “Status quo” at least three times.  So until 33 decides otherwise that will be the way his continued pondering will be described.

Sportsnet: Three teams that could fall down the 2019-20 NHL standings. If this article is listed under Jets news it means that Andrew doesn’t have a lot of faith in the Jets this season.

The Hockey News:  Why Connor’s seven-year, $50-million pact has potential to be a steal for the Jets.  This deal certainly will make fans happy that they no longer need to discuss getting Kyle Connor inked to a new deal for quite some time.