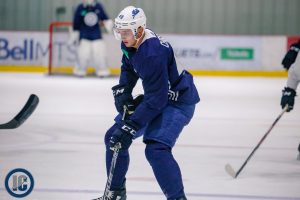 It is a Jets day off but the team did announce today that they have assigned five players to the Moose:

*The Schilling assignment requires him to pass through waivers.

This leaves the Jets with 27 players at camp:

With the news that Patrik Laine has signed a two-year deal with the Jets today it brings the number of players at camp to 28.