The veteran defenceman has 19 points in 40 games for the Moose this season. 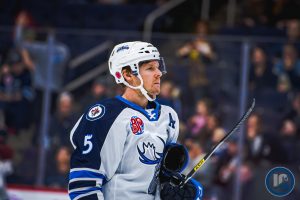 For the second time this season veteran defenceman Cam Schilling is heading up to the big club as the Jets have announced his recall. Schilling didn’t play any games for the Jets during the seven days he was up with the big club at the end of November and into the beginning of December.

It has been a rough week (or season) for the Winnipeg blueline. Consider that Carl Dahlstrom didn’t play the third period of the game on Tuesday and was ruled out for a minimum of six weeks by Head Coach Paul Maurice.  In addition Tucker Poolman is on the shelf until at least next week and Dmitry Kulikov was fighting the flu earlier this week.

In 40 games with the Moose Schilling has five goals and 14 assists including a goal on Wednesday night in a 3-2 Manitoba OT victory.