The Moose came into tonight’s action on quite the slide having lost four straight and five of their last six games. 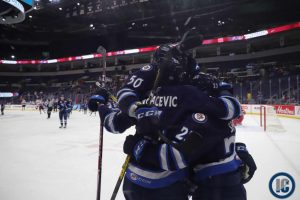 Couple of early 1st period penalties put the Moose behind the eight-ball as the Senators opened the scoring.  Hockey is a funny game.  The Moose had tilted the ice back in their favour but with 1:02 left in the opening frame a puck snuck through Eric Comrie but went just wide of the net.  Shortly thereafter and with :29 second left in the period Logan Shaw one-timed a Leon Gawanke pass on a Moose power play to tie the game.  But Manitoba would not sit back as Michael Spacek fed Cam Schilling on a beauty no-look pass which the veteran defenceman buried to make it a 2-1 game for the Moose just :18 seconds after they had tied it.

A bit of a snafu behind the Moose net saw Manitoba goalie Eric Comrie unable to regain his crease in time to prevent Joseph LaBate from putting the puck into the back of the net to tie the game.  Other than the tying goal it was an even period and would end that way after 40 minutes with the game tied 2-2 and shots tied 20-20.

There was lots of energy in the 3rd and while both teams had chances to take the lead neither could solve the opposing netminder.  This included a couple of Moose power plays but Belleville plays such a fast and aggressive game they really didn’t allow Manitoba to get too many clean looks.

This game would need OT which ended with Michael Spacek putting home a rebound which was his fifth goal of the season and second point of the night.

Michael Spacek does it. Ends the game in OT. Moose win 3-2. Post game to follow on https://t.co/UggUR7UtEy pic.twitter.com/j8aMZO85CV

It was quite a reaction from the bench as they swarmed Spacek. With the victory the Moose improve to 19-23-0-0.

The Moose are the only team in the AHL without an overtime or shootout loss.

The Moose are scheduled to visit Siloam Mission tomorrow morning.  They will be back on the ice for practice on Friday at 11 AM.