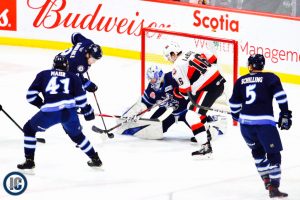 CJ Suess, who skated this morning at the IcePlex, was a scratch with a lower-body injury.

The Moose found themselves down 1-0, 2-1 and then 3-2 after 20 minutes of play in the 1st period. All three goals against were almost directly attributable to a Moose defenceman mistake.

Discipline also appeared to be an issue with the Moose taking four straight penalties and five of six in the 1st and 2nd periods which really killed them trying to re-gain some momentum. While they were able to kill all the penalties they faced they made it tough for themselves playing shorthanded that often in a tight game.

Joona Luoto probably played his most complete game since joining the organization. He was all over the ice.

However the best player on the ice by far was Eric Comrie who, despite giving up four goals against, was simply sensational making 35 saves. And at least 10-15 of them were grade A chances for the Senators. Comrie’s play was so good that the Moose were within striking range of tying this game late when Brandonite Ryan White scored with 4:46 left in the 3rd period to make it a one goal Belleville lead.

The visitors would seal the deal with an empty net goal. Manitoba’s overall record falls to 18-23-0-0.

Ryan White had his first goal and assist of the season.  The veteran of 313 NHL games has been limited to just 10 games this season due to injury.

Pretty much the entire Ryan White post-game scrum was quote-worthy.

“I’m always fired up man.  I’m trying to play hard.  It’s not Roblin Park fucking river hockey.  This is real hockey man.  I don’t understand it.  The games changing right in front of my eyes and to me it’s embarrassing.  I think it’s got to be played harder.  It’s got to be played harder if you want to win.  I don’t care what time it is in the game, if coach puts me out there I am going hard.”

“It means we’re outworking other guys.  That’s what it means.  We’re out competing them.  Kristian Reichel he’s working his bag off out there, moving his feet, doesn’t deserve to come out of the lineup, keeps getting cut out of the lineup.  Pedersen same thing, hard working guy.  We’re just outworking them.  They want those minutes.  Come get ’em from us.  Come outwork us.  That’s it.”

The Moose are scheduled to practice on Tuesday as they get ready for a re-match with the Senators on Wednesday night.