The seventh year pro is back in the AHL after clearing waivers. 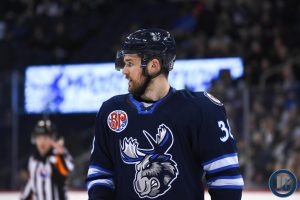 The Jets assigned Logan Shaw back to the Manitoba Moose on Thursday after he cleared waivers as they made room for Dmitry Kulikov who was activated off IR.

The Glace Bay, Nova Scotia product is in his second year with the Jets/Moose organization and this was his first stint up with the NHL club.  Shaw got into 25 games with the Jets and had two goals and one assist playing on the 4th line.

Shaw’s return to the Moose will be a big boost for a team that could use scoring. In eight games with the Moose this season he has three goals and two assists.

Manitoba plays the Griffins tonight in Grand Rapids.  Puck drop is at 6 pm.