Jets hit the ice in Winnipeg for practice before they leave for Detroit. 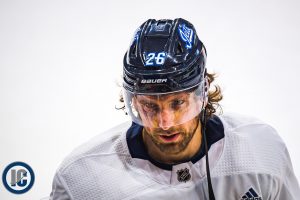 Following yesterday’s 5-1 win over the Red Wings the Jets will practice here in Winnipeg before they leave for Detroit to complete the home and home series with the fellas from Motown.  The Jets will put their 10-5-1 road record up against the Wings 4-11-1 record at Little Caesars Arena. Detroit is spiralling down having lost their last 12 games (0-10-2).

Missing from today’s skate according to Brian Munz of TSN 1290 Winnipeg based on his line rushes and D pairs below are Adam Lowry, Tucker Poolman and Neal Pionk.

Coach Maurice:  Anything up with the guys who didn’t skate?  What has he thought of Nick Shore after a couple of games?  Patrik Laine’s breakaway move.  The improvement of Laine’s defensive game.  More on Patrik Laine.

With Adam Lowry, Tucker Poolman and Neal Pionk missing from today’s skate the Jets bench boss was asked if there were any issues with the missing trio and he indicated “No, would be similar to them the other day.  Trying to get ahead of some things but clearly by their performance they are fine to play.”

We know, courtesy of coach Maurice on Monday, that he will start Connor Hellebuyck tomorrow night in his home state.

The Jets will face the Red Wings tomorrow night at 6:30 pm CT.  Be sure to keep it locked to illegalcurve.com for the AM Papers which go live at 7 AM.