Note:  Today is a big day for the Winnipeg Jets return to the NHL as they hold their first open practice and IC will be there covering all the action.  Make sure you follow us on twitter @illegalcurve to see all the pictures from today’s camp.  Also remember to tune in from 12 pm cst to 3 pm cst on Sports Radio 1290 as the Illegal Curve Radio Show moves to it’s new time and we will have 3 hours of hockey talk including audio from our interviews with players at camp.

Winnipeg Free Press:  Jet engines start winding up.  The MTS IcePlex will be rocking for the first training camp in over 15 years and the Jets players are ready for lift off.

Winnipeg Free Press:  Luck of draw means tickets for fans.   Get your name in for a chance to win the opportunity to purchase tickets.  IC’s Remis was down at the MTS Centre all day and offered his thoughts on the Jets new system.

Winnipeg Sun:  Into the unknown with Jets.  Which is why all the prognosticators in the world can’t tell you exactly how a season will play out.  While many expect these Jets to finish anywhere from 8th-13th, we won’t know until that last game of the regular season against the Bolts how this team has done. 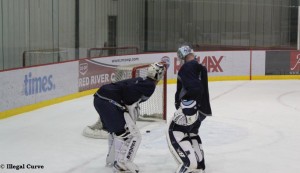 Winnipeg Sun:  Jets return ‘exhilarating, exhausting.  In our tour of the MTS Centre yesterday, you could see that work was still being done to get the place into NHL shape.  The men and women who work on the MTS Centre for True North deserve a lot of credit for getting things done as quickly as they have.

After the jump Jets fans to watch practice today, Buff keeps quiet about legal issues, Noel gaining a handle on Jets, Jets players can kiss anonymity goodbye and an excerpt from Randy Turner’s new book ‘How Winnipeg won, lost and regained its place in the NHL’.  In ‘Around the NHL’ news, Corey Perry continues to grow for Ducks, Crawford Hawks #1 tender going into camp, Sabres Roy eager to start and can Canucks overcome hangover?

Winnipeg Free Press:  Fans’ last chance to watch practice.  I believe that Saturday the 24th is also an open practice, so while you will have 2 chances to see the Jets, today’s practice will have a magic as it will be the first in this team’s existence and you can expect the IcePlex to be jam packed with fans.

Winnipeg Sun:  Jets’ Buff clams up.  Can’t really expect him to open up too much to the media right off the bat anyways, and especially when the subject is about pending legal issues.

Winnipeg Sun:  Noel gaining a handle on Jets.  We often forget that he has a job to do and while fans expectations might not be too high just yet, he still has bosses which he needs to impress.

Globe and Mail:  Jets players can kiss anonymity goodbye.  The players are going to be living in a fishbowl, there is no denying that.  But it comes down to what sort of player you want to be.  You can be an anonymous face in the crowd elsewhere, or you can be someone who is noticed and picked out simply for the job you do.

Winnipeg Free Press:  Fergie’s Way.  Randy Turner wrote a book entitled ‘How Winnipeg won, lost and regained its place in the NHL’, which will be available in local bookstores Sept. 26

OC Register:  Perry grows up.  As I tried to explain to people who selected the Ducks game against the Jets on the 17th of December, even had Teemu retired (very happy he didn’t) Anaheim still is a great team to watch, including a chance to see the NHL’s reigning MVP.

Chicago Sun-Times:  Goalie Corey Crawford enters camp as Hawks’ starter for first time.  Didn’t realize that Crawford is just 26 years of age.  Chicago is hoping he can keep them stable next season.

Buffalo News:  Roy eager to get back to work for Sabres.  The longest tenured coach with one of the most solid goalies in the league, the question for these Sabres is will the new parts improve them to Cup contenders this season?  A healthy Derek Roy is a good start.

Globe and Mail:  Can Canucks handle Cup hangover?  If Vancouver is looking for inspiration, they need look no further than the Pittsburgh Penguins, a team that shook off a Stanley Cup defeat to Detroit, to win the Cup against those same Wings the following season.