Winnipeg Free Press:  Shaw lands TSN Jets channel.  Good news for Jets fans, although you will have to pay to play after December.  I’m sure MTS customers are waiting to hear similar news.

Winnipeg Sun:  Chipman to miss first exhibition game.  I’m sure that he will be glued to IC to get all the latest game day news.

Winnipeg Free Press:  Byfuglien arrives in Winnipeg.  All things considered he seemed to be in a pretty good mood.  IC’s Remis asked him about taking the 2nd most shots last season (to Ovechkin) and whether he might repeat that this season, and he indicated that if all went well, he might.  I’m more concerned that we both own that same Lululemon shirt and I don’t want to get caught in a TMZ “who wore it better” type photo. 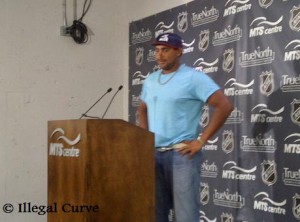 Yahoo Sports:  Jets fever grips Winnipeg ‘everywhere you go’.  Jets coach Claude Noel is only partially right when he says “We haven’t played a game yet, so this could be our most popular time right now”.  If/when the Jets make the playoffs, if/when the Jets win their 1st playoff series and if/when the Jets win a Stanley Cup, then you will see this city like you’ve never seen it before.

After the jump the Jason Gregoire back home, Jets announce a new youth program and Keith Urban dons a Jets jersey.  In ‘Around the NHL’ news Leafs coach talks playoffs, injruy to Habs Markov casts pall over camp and Pegula sends a message in Buffalo.

NHL.com:  Jason Gregoire back home.  Gregoire has had the luxury of being close to the home base and hopes to continue that trend with a good training camp with the Jets.

CTV:  Jets announce support for youth programming.  A worthwhile cause for the Jets to champion in the city.

CBC:  Keith Urban dons Jets jersey.  If you’re a country music fan (which I’m not) then maybe this will make your day.  I do wonder if we can expect Pearl Jam’s lead singer Eddie Vedder to wear one on Saturday night?

National Post:  Wilson on the Leafs playoff chances.  The Leafs looked good towards the end of the season, but will they be able to compete all year long?

Montreal Gazette:  Andrei Markov’s setback casts a pall over camp.  The Habs can probably survive for a bit but a prolonged absence will be a really tough liability.

Buffalo News:  Pegula sends message and Myers receives it.  This is an owner that the city of Buffalo is absolutely thrilled about and they really think a Stanley Cup is around the corner.