Note:  The Jets were off on Wednesday following the conclusion of their four-game road trip.  Today they have a re-match with the Capitals as they conclude this home and home series.  There are plenty of question marks heading into morning skate at Bell MTS Place which gets underway at 10:30 AM CST including the status of Josh Morrissey, Sami Niku, Mathieu Perreault and perhaps Adam Lowry.  Be sure to check back for the pre-game report which will contain all the latest news and audio.  Puck drop is at 7 pm.

Note II:  Another day of practice for the Manitoba Moose today as they continue to prepare for the Chicago Wolves this weekend here in Winnipeg. Following practice on Wednesday the team were reading to school kids around Winnipeg as part of the #StickToReading initiative.

Winnipeg Sun:  Jets Gameday.  Scott big story is can the Jets begin like they ended? His five keys to the game include: 1) What will this team’s lines look like? 2) Speaking of leads 3) Keeping Ovi in check. 4) Dig deep. 5) Hellebuyck heroics. 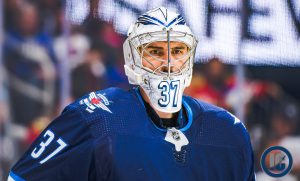 Winnipeg Sun:  Jets’ playoff ambitions depend on team scoring first.  As Scott outlines they really need to change their fortunes in the opening 20 minutes of these remaining games if that is still possible.

Winnipeg Free Press:  Breaking down Winnipeg’s playoff chase.  (Paywall).  Jay hits it on the head.  Expect the cliches to be out in full force but that shouldn’t be all that unexpected.

The Athletic Winnipeg:  Winnipeg needs to bottle that comeback formula for 17 more games.  (Paywall).  That fight won’t be easy to replicate but the Jets don’t have any choice when you consider they’ve only got 17 games left in the regular season with plenty of action against teams around them in the standings.