A look at the game 66 projected lineups and pre-game audio. 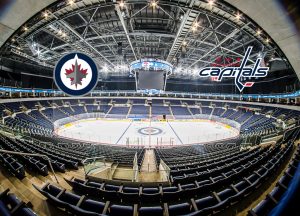 The Jets salvaged a point against the Capitals in Washington on Tuesday night after going down 3-0 but managing to fight their way into extra time where they ultimately lost in the fifth round of the shootout to the top team in the Metro division.  Today the two teams will meet again as they conclude this home and home series and it won’t get any easier for Winnipeg as Washington has been a better team on the road than they have been at home.

So many questions coming into today’s game and none were answered on Wednesday since the Jets had the day off.  What is the status of Josh Morrissey who missed the last two games with an upper-body injury?  What is the status of Sami Niku who was scheduled to play the game in Washington on Tuesday but ultimately missed it due to a lower-body injury sustained prior to warm up skate?  As well Luca Sbisa, who was supposed to be out “at least a week” which was what coach Paul Mauice said on February 18th, may not be ready to go!  What is the status of Mathieu Perreault who hasn’t played since he left a game against the Bruins on the 31st of January and was labeled out with an upper-body injury with the initial expectation he would miss two weeks?  Perhaps there will be more answers today following skate.

Lastly the final question surrounds the composition of the forward lines.  Will it look like how it began the game against the Caps or will they revert to how they ended the game?  Since the latter option seems more likely that is how they will be listed for now and they will be updated once skate gets underway at Bell MTS Place.

Prior to morning skate the Jets announced they have recalled Nelson Nogier from the Moose.

According to Scott Billeck of the Winnipeg Sun a number of players wearing non-contact uniforms including Adam Lowry, Josh Morrissey and Carl Dahlstrom.  The team took their team photo but according to Murat Ates of The Athletic Winnipeg both Mathieu Perreault and Sami Niku didn’t stay on the ice afterwards for skate.

Coach Maurice:  Health updates.  Andrew Copp being able to adjust to so many different linemates this season.  The success Alex Ovechkin has had against this organization and what stands out about him this season?  Do they defend him differently?  Given what has happened to the blueline this season what goes through his mind when he hears about the Niku injury?  Soccer injury?  Would he want to see more home and home series in the NHL?  How would the players feel? Changing up the forecheck.  The message to the team.  Any benefit to the fluidity of the forward lines?

Jets bench boss Paul Maurice began his availability with an update on his numerous injured players.  Sami Niku is out week-to-week, Josh Morrissey is trending very well and may lose the gold non-contact and get into a normal uniform and he might be available for Edmonton, Adam Lowry is not yet day-to-day but he would take him off week-to-week, Carl Dahlstrom is fairly close, needs a couple of practices and once he is in a normal uniform there won’t be any turnaround time and he would be available.  Bryan Little has gone for his surgery.

He wasn’t asked about Mathieu Perreault or Luca Sbisa so no update on them yet.

Puck drop is at 7 PM CST.  Be sure to head over to illegalcurve.com following the game for a recap of the action which includes post-game audio from the Jets room as well as from Coach Maurice.