Nogier recalled for the fourth time this season. 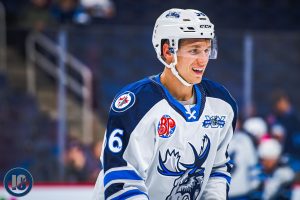 With question marks surrounding Josh Morrissey and Sami Niku the Jets announced they have recalled Nelson Nogier from the Manitoba Moose in advance of their game against the Capitals tonight.  And Luca Sbisa was supposed to be out “at least a week” which was what coach Paul Mauice said on February 18th but perhaps he too is also not ready to go.

Morning skate gets underway at 10:30 AM here in Winnipeg and after you can expect an update from head coach Paul Maurice.

This is the fourth time this season the Jets he has been recalled by the Jets although the 2014 4th rounder by Winnipeg hasn’t played an NHL game this season.  In 55 games with the Moose he has one goal and eight assists.