Note: The Jets were off on Trade Deadline Monday but that didn’t stop them from making quite a bit of news.  The day began with the news that Winnipeg was still looking for a dance partner on Dustin Byfuglien and GM Kevin Cheveldayoff also indicated that 33 would not play this season which was not really a surprise.  While it wasn’t expected that the Jets would be active on Monday in the end they made zero moves.  GM Kevin Cheveldayoff held a media availability once the deadline had passed to talk about his team.  Today they are in Washington to conclude this four-game road trip against the Capitals.  Morning skate gets underway at 10:00 AM CST so check back for the pre-game report for the latest news and audio.

Note II:  The Moose were also off on Monday.  The only news related to the AHL squad was that the Jets had reassigned Logan Shaw to them in a paper transaction as he needed to be assigned to Manitoba before 3 PM EST yesterday in order to be eligible to play in the AHL at any point this season.  It was a paper transaction as he would immediately be recalled by Winnipeg since both Mathieu Perreault and Adam Lowry remain injured. 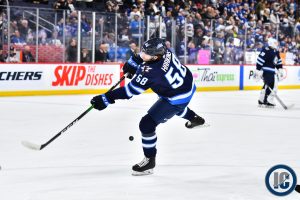 Winnipeg Sun: With trade deadline hoopla over, Jets simply need to perform better.  It certainly won’t be an easy task for this Jets team to climb that mountain but they still have a chance to get into the post season dance.

Winnipeg Sun:  Chevy loses appetite for big swing at deadline.  After making big splashes the last two trade deadlines standing on the sidelines for this one was the right decision by the Jets brain trust.

Winnipeg Sun:  Big Buff off skates, off the Jets’ books. Dustin Byfuglien is not quite off the books yet but it seems it is only a matter of time at this point.

Winnipeg Free Press:  Chevy made right move by not moving, but fans expect action-filled summer.  (Paywall).  No doubt Cheveldayoff will have some work to do although given the RFAs he had last summer this one may be a bit of a cakewalk.  Of course he’ll have some spots to fill but with plenty of cap space he should be able to get creative.

Winnipeg Free Press:  Cheveldayoff and Jets stay on the sideline on final trade deadline day.  (Paywall).  Given how deep the 2020 draft is reported to be a wise choice to keep his gun holstered for this trade deadline.

The Athletic Winnipeg:  Last call for Jets core? Playoff push is on but big changes could be on the way.  (Paywall).  Will the Jets core be changed for next season?  I’m not so sure about that but the upcoming offseason should be fascinating to follow.

The Athletic Winnipeg:  Winnipeg needs 200 feet from its stars more than it needs an eleventh-hour deal.  (Paywall).  Murat looks at the play that cost the Jets on Sunday and how the team will need to improve defensively collectively rather than find some miracle trade that is going to solve all their problems.

Sportsnet: Jets veer away from ‘quick fixes’ with first tepid deadline in three years.  The right decision especially in light of the fact that they will need to re-stock the cupboard this summer.

Sportsnet: Logan Stanley a fascinating Jets prospect to watch | In The System. Sam Cosentino takes a look at the top prospects in the system for the Winnipeg Jets.