A look at the game 65 projected lineups and pre-game audio. 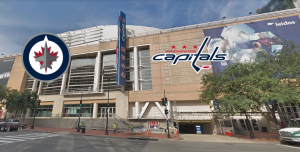 The Jets will be looking for a win tonight in Washington as they have lost two of three games so far on their current four-game road trip.  It won’t be easy as the Jets face the top team in the Metropolitan division who hold a 17-9-5 home record at Capital One Arena.  But they are 3-6-1 in their last 10 games.

Yesterday GM Kevin Cheveldayoff indicated Josh Morrissey was day-to-day but said to expect an update today from head coach Paul Maurice.  So we shall have to wait and see if he plays as well.  Additionally the projected lines are simply based on how the last game ended.  It will be updated once the Jets hit the ice.

According  to Jason Bell of the Winnipeg Free Press no Josh Morrissey for morning skate in Washington.  As per Ken Wiebe of The Athletic Winnipeg it looks like Jansen Harkins will remain on the top line and that Laurent Brossoit will get the start in net.  Sami Niku wasn’t staying on the ice for extra work adds Ken so it would appear the mobile defenceman will draw back into the lineup.

Jets PR indicated Sami Niku will not dress due “to a lower body injury sustained prior to pre-game warm up.”

Andrew Copp on Alex Ovechkin hitting 700 goals in the NHL, trying to limit his opportunities, post-deadline thoughts and the importance of getting a good start.

Patrik Laine on what it means to hit 300 games, assessing his career to date, what it is like to be in Washington when they honour Ovechkin, what 700 goals could be like to achieve, still mean something to face Ovechkin and the wow factor.

Coach Maurice:  Update on Josh Morrissey?  Sami Niku comes in?  Thoughts on the top line with Harkins?  Is Morrissey day-to-day?  What has Niku done to get back into the lineup?  Jets making no moves on trade deadline, how did he view it?  Ovechkin being honoured for scoring 700 goals.  Anything sticks out coaching against Ovechkin?  The continuity of his career (related to the extension he signed).  How has he evolved?  What does Kovalchuk add to the mix?  Laine playing his 300th NHL game.

When asked for an update on Josh Morrissey bench boss Paul Maurice confirmed that he will not play tonight and will be evaluated further in Winnipeg.

Puck drop is at 6 PM CST.  Be sure to head over to illegalcurve.com following the game for a recap of the action which includes post-game audio from the Jets room as well as from Coach Maurice.

Winnipeg Jets Morning Papers
Winnipeg Jets Josh Morrissey is day-to-day, will be held out vs Capitals and evaluated further in Winnipeg