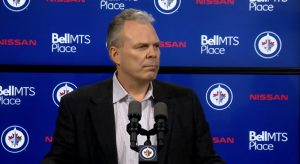 Jets GM Kevin Cheveldayoff spoke to the media today after the conclusion of the NHL Trade Deadline day.  A day in which the Jets made zero moves.

Trade deadline Topics:  Were they close on anything today?  Not wanting to trade draft picks to make a move?  Could the Jets have been buyers and sellers today?  Rewarding this group, how does he feel his team responded?  How did the last two losses impact his decision making today?  How did the current team injuries impact this trade deadline?  Status of Josh Morrissey?  Any AHL moves.  More on Dustin Byfuglien.  Question on Byfuglien contract status.  Was he hindered by cap space?  Could this summer be a lot different in terms of flexibility?  When did he become aware of Byfuglien’s status for this season?  Does he know Byfuglien’s status for next season?

Status of Josh Morrissey –  “It was an off day today. So they just did medical treatments. They didn’t do any on ice stuff or anything like that. I guess, Paul usually gives the updates, but I would guess classify Josh as a day-to-day given what I know and given me being here and them being there.”

AHL availability – Logan Shaw was made available to the Moose ahead of the 3 PM deadline so he is eligible to play for Manitoba this season.

When did he become aware that Dustin Byfuglien wouldn’t play this season –  “I guess it would be a couple of weeks ago when he should have progressed to the skating aspect of the rehab and he never did.”