Note:  We learned on Thursday after practice that the Jets D had taken another hit when Jets coach Paul Maurice indicated that Carl Dahlstrom would be out a minimum of six weeks with a broken bone in his hand.  There hasn’t yet been a recall from the Moose (Update: Cam Schilling was recalled).  The Jets will have a morning skate today at Bell MTS Place as they get set to welcome the Lightning who played and lost last night to the Wild.  Be sure to check back for the pre-game report for the latest news and audio.  Puck drop is at 7 pm.

Note II:  The Moose spent their Thursday at Siloam Mission helping out some of the less fortunate citizens of Winnipeg.  Today they will hit the ice at 11 AM as they prepare for a pair of afternoon games this weekend here in the city against Laval.

Winnipeg Sun:  Jets anthem will touch the heart of First Nations.  A really nice touch in conjunction with the celebration of Indigenous culture.

Winnipeg Sun:  Maurice can relate to the painful experience of NHL coaches getting fired.  The Jets bench boss genuinely seemed surprised that he was one of the longest tenured coaches in the NHL when he was informed of that detail yesterday following practice. 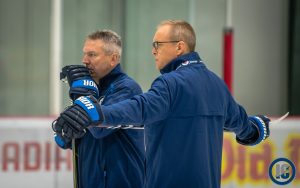 Winnipeg Sun:  Perreault spitting mad over lack of action on Virtanen elbow.  It is hard to blame Perreault for his anger which is still smoldering days later. He certainly didn’t hold back with the media yesterday.

Winnipeg Free Press: Hats off to the wily survivors. (Paywall).  Maurice and Cooper will go head to head tonight.

Winnipeg Free Press: Perreault frustrated, furious over NHL’s silence after elbow to head goes unpunished. (Paywall).  One thing about Mathieu Perrreault.  He is not afraid to speak his mind.

Winnipeg Free Press: Perreault says NHL failing to protect players from dirty hits. (Paywall).  Mike asked the questions in the scrum yesterday and they were valid.

The Athletic Winnipeg:  No gold medal, but David Gustafsson proud of bronze: Jets prospect came back to North America, the quickest path to his ultimate goal.  (Paywall).  Ken caught up with the Jets 2018 2nd rounder who joined the Moose here in Winnipeg this week.