After a day off the Jets were back on the ice as they get set for the Bolts. 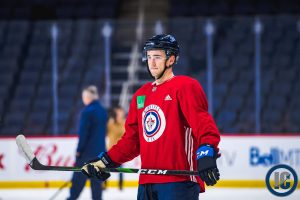 The Jets were off on Wednesday as they took the day off following a win on Tuesday night against the Canucks.  Some questions ahead including the status of Carl Dahlstrom who is expected to miss some time but the approximate duration was still unknown as of Tuesday night, the status of Dmitry Kulikov who was/is dealing with a flu and which defenceman they will recall from the Moose (best guess is it will be Cam Schilling) although they may wait until tomorrow for that recall.

According to Ken Wiebe of The Athletic Winnipeg veteran defenceman Dmitry Kulikov, who was dealing with the flu, is on the ice today for practice.  As per Mitchell Clinton of Jets TV all regular players are on the ice for today’s skate as well as injured veteran forward Bryan Little who continues to join the squad on a more regular basis. Mitch also provides the lines and D pairs listed below.

Coach Maurice:  Status of Kulikov?  Has the flu been running through the team?  Update on Dahlstrom.  The loss of Dahlstrom.  Perreault’s anger at the lack of discipline for the elbow he took on Tuesday.  The firing of Gerard Gallant.  On how the defence has played with the challenges of the constant roster changes.  What does he remember from his first interaction with Connor Hellebuyck and what has he learned about him?  Is there any added camaraderie among the D group?

Coach Maurice confirmed that Carl Dahlstrom is out six weeks with a broken bone in his hand that he sustained in the game against the Canucks.

The Jets take on the Lightning tomorrow night at Bell MTS Place at 7 pm.  Be sure to keep it locked to illegalcurve.com for the AM Papers which go live at 7 AM.