Note: The Jets took Wednesday off following their 4-0 win over the Canucks on Tuesday night.  Today they are scheduled to practice at Bell MTS Place where we will learn the status of Carl Dahlstrom who is expected to miss some time after he sustained an injury against Vancouver (Update: He’s out six weeks).  Be sure to check back for the Practice Report for all the latest news and audio.

Note II:  The Moose picked up an important victory last night thanks to some stellar goaltending by Eric Comrie and Michael Spacek depositing the winner in OT to deliver a 3-2 win over the Senators.  Today they will head to Siloam Mission for some charity work.  They’ll be back on the ice on Friday to prepare for a pair of games against Laval.

Winnipeg Sun:  Perreault spitting mad over lack of action on Virtanen elbow.  Hard to blame him for his anger which is still smoldering days later.  He certainly didn’t hold back.

The Athletic Winnipeg:  No gold medal, but David Gustafsson proud of bronze: Jets prospect came back to North America, the quickest path to his ultimate goal.  (Paywall).  Ken caught up with the Jets 2018 2nd rounder who joined the Moose here in Winnipeg this week.

Winnipeg Sun:  Another head-shaker from NHL player safety.  Perreault is not an overly confrontational type so you knew when he was yelling at the Canucks bench that it was something serious.  Not a good look for NHL Player Safety to look the other way for that type of hit. 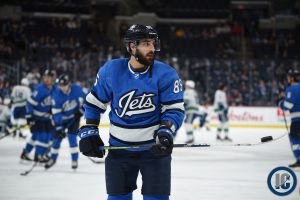 Winnipeg Sun:  Students to sing national anthem in Ojibwa at Winnipeg Jets hockey game.  This is fantastic.  In conjunction with the jerseys the Jets will wear during warm up skate.

Sportsnet: Where will Gerard Gallant coach next? Analyzing seven potential destinations. While he pegs it as unlikely Winnipeg is listed by the author as one of his seven spots for Gallant.

TSN 1290 Winnipeg:  Darren Dreger on The Afternoon Ride.  The TSN hockey insider joined Hustler and Rick to chat about a number of topics but the one that was pertinent to Jets fans was the questions they asked him about Dustin Byfuglien.